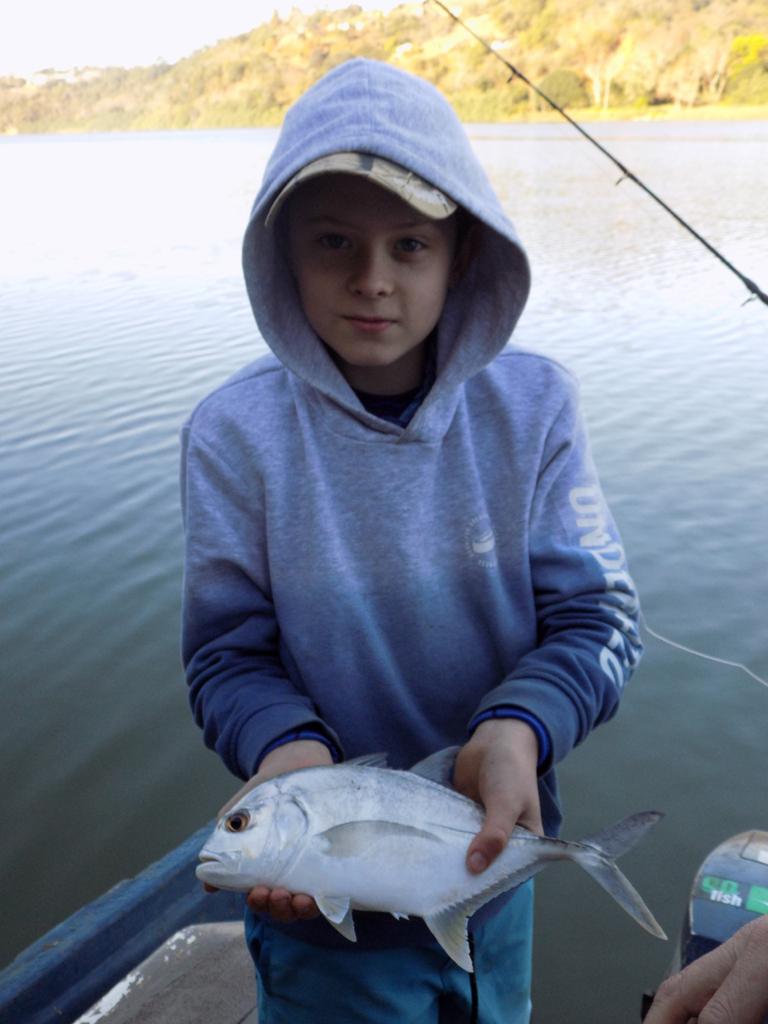 In this video shot on a morning fishing trip on the Umzimkulu River – young Evan Phillips gets his baby GT. And we catch Chelsea Dog Attack Behaviour red-handed on camera.

A few pics of the Umzimkulu Marina, in Port Shepstone, where we are based at the moment.

The river valley woke up freezing this very wintery but beautiful morning. The offshore was coming straight off the mountains and it sure felt like single figures. So when the sun showed itself, departure came about. A nice full boat of fisherfolk. David Phillips and his wife Robin. Evan. And little lady Jordan who took on camera duty all dressed in pink! We also had Arno from Fishin’s Cool Fishing School.

So with three guns firing off the bow, and three in ambush positions out the back, we followed the far channel to the top, and right over the big hole area.

Soon Evan was bending on his beautiful little baby GT. Who put up quite an argument or was just acting real good for the camera.

When the fish finally came to the boat, Chelsea Dog leapt out of her own ambush position! But Dave was too quick and she retreated in disgust. Dave got the hook out easily enough and Evan was soon posing. And then justly released the absolutely dashing young GT back into the wild. After a quick lecture about that Halco Sorcerer in Jelly Prawn outfit.

You can buy that guy right here. Both Dave and Johan Wessels independently vouch for this particular model and colour. And I can attest to its effectiveness – we have lost all the ones Johan left for us on his last trip! Actually it was my Dad! He has been tangling with rock salmon and all sorts of bad mannered lure thieves that been lurking around here lately.

The Umzimkulu Marina has a few open slots still. Weeks and weekends coming up. Please get in touch to arrange your dream estuary fishing experience. For you, your friends or you and your family – this place is great fun – safe – and there really are some good fish be caught. And released. We practice tag and release wherever possible and only take a fish for the pan, in extreme circumstances.

You can get me Sean on +27793269671 or on umzimkulu@gmail.com to get the ball rolling. We have boats for charter or for hire. Self-catering chalets right on the river.

And plenty fish to catch.