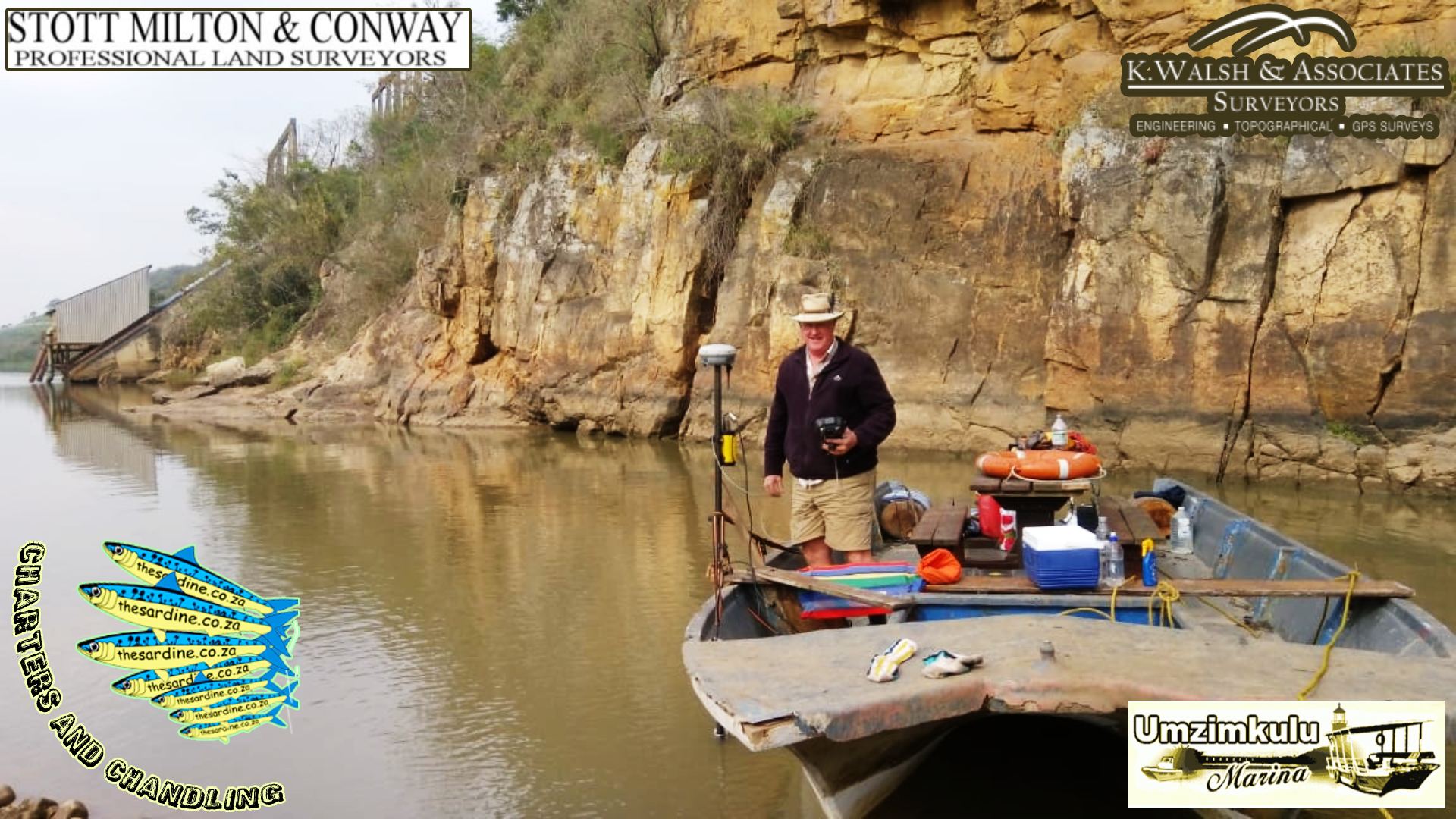 Surveying and surviving St. Helen’s Rock: Just after that mind-blowing cut-off low pressure tempest abataed down here on the KZN South Coast, we got a visit from Rory Conway of Stott, Milton and Conway Surveyors. The crew needed assistance with some surveying way upriver. The Umzimkulu River! The river I have literally grown up in and on.

Needless to say, I jumped at the chance and it wasn’t long before I was on my way to meet Kevin Walsh. The marine surveyor that we were to facilitate for the week.

For this first day, we used a RIB with a big and powerful 70hp motor. The motor was trimmed right with a healthy piece of plank and set into its position for rock hopping.

We met at the first berm (see diagram above and accompanying video). Loaded up equipment, including bags of cement, sand, stone and gypsum (surveyor stuff). Plus Kevin and his assistant Sackson. The water was flowing in the river. Which is why we used that boat. We were a good half a metre of water higher than usual which kept us off the rocky bottom. But we needed that 70hp to get up against the raging waters. That were subsiding still from the radical cut-off low tempest that did so much damage the week before.

The last beacon that we had to put in, was way up the mountain and into the bush. Where boats can’t go. Kevin and Jackson had to carry all that survey stuff, about two kilometres. Along the railtrack and back over the river. To plant the last cross!

Was actually 5 days after day one and the waters had dropped another 30cm or so. And were not flowing that hard. For this mission and the next few days, we used our big old butt cat barge as a survey platform. The aerials and GPS staff was fitted custom to the boat and we were a mean surveying team. Getting about 80% of the work done on the first day.

This was by prior agreement and planning, that we should nail all the easy stuff right off the bat. And then do the difficult stuff with the remaining days.

Filling in any gaps from the day before, and negotiating islands, headlands, reefs and all sorts, we pushed the next few percent. Tough going, Kevin had to disembark and walk miles over rocky loose surfaces. And sinking sand!

Was earmarked to go up the third rapid again. At St. Helen’s Rock. And survey the pool and waters where the Umzimkulu is joined by the Umzimkulwana. Different shades of mud at this point.

We nearly didn’t make it. Only our third attempt pushed the big old barge up and over. Had to run the petrol and the electric to get that last few ounces of speed required.

And along the way, we nearly had an accident. As we failed our 2nd attempt, Kevin and I both threw anchors. But only the back anchor took hold. Throwing us into the current and whipping us back up against the rocks and bank. Where we got stuck! The rope whipped across the deck as the current took hold of us and we were mercilessly swung around in the torrent.

It took a while to get ourselves back together but the third attempt saw us through.

It was a great day of surveying in quicksand and mud. But the big boat couldn’t go the last mile because of these obstacles.

And so we bought in the Mad Mullet. This modified skiing boat can go anywhere and is built tough to handle rocks and things. We nearly lost Kevin a number of times as he plodded around the murky waters looking for the edges of sandbank and reefs and bridge pylons.

Right, so The Sardine Charters and Chandling have been undertaking marine survey jobs for decades. Check out this playlist for some of the adventures…

So if you need some hardcore marine work done for your next survey, you know who will do the job right for you, no matter what.

The Sardine News and the Master Watermen websites are powered by TLC for your Business.