Glenwood, Durban – Port Elizabeth longboard skateboarder Jason Brown made it two wins in two today by winning the open men’s division at the second annual Urban Descent Downhill Longboard Race presented by Quiksilver and Gunslinger. Brown was a clear favourite going into the four-man final, clocking speeds of up to 75 kilometres per hour. The much anticipated open men’s final was tightly contested coming into the final straight before three riders collided at high speeds leaving them all on the tarmac deck and out of contention. “I am happy to be back in Durban and to take the win again, there were some heavy slams today and I am glad everyone is safe after a gruelling day of racing,” said an ecstatic Brown after the event award ceremony. 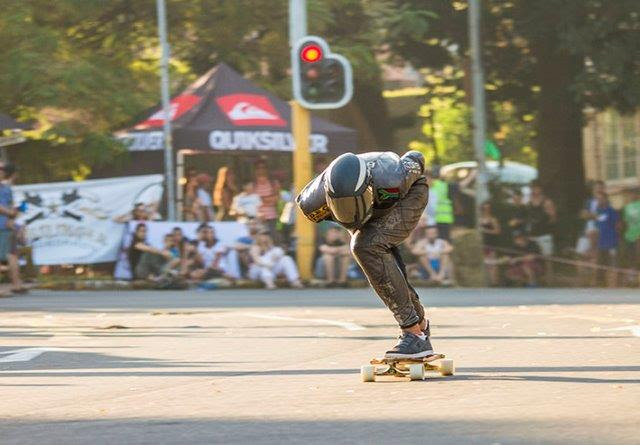 Over eighty competitors made their way to Alan Paton Road in Glenwood to race along a 1 km length route which featured a number of bends and chicanes before a final straight to the finish line. Hay bales were carefully positioned as a safety precaution for racers, most of whom wore special racing leather outfits and compulsory helmets. Participants were categorised into five divisions; open men (19 and older), ladies, junior boys 1 (12-14), junior boys 2 (15-18) and supergroms (8-11). A number of time trials and qualifying rounds got underway before the top four finishers in each division were grouped into finals. Odin Kerkhoff (Durban) managed a flawless race to win the supergrom division, while Sebastian Rich (Durban) and Michael Davies (Durban) stole the show in the junior boys 1 and junior boys 2 divisions respectfully. Gabi Murray-Roberts made the trip up from the cape and showed her class to easily claim the ladies title.

“We were very pleased with the Urban Descent Downhill Longboard Race presented by Quiksilver and Gunslinger today, the racing was spectacular and there were some radical bails leaving some riders in some serious pain, we hope to see an even bigger field next year,” said event organiser Keith Hockly of Gunslinger Longboards.

For more information and photos of the event, visit the event mini-site at: www.quiksilver.co.za/urbandescent.