Tim and Ross from CT had been here on a 3-day trip three years ago and in that trip released three Blacks up to 450 lbs in horrible conditions. Still today I talk about it as the absolutely more shity crappie water I have ever caught a Marlin. The water was not green, it was brown!!!

It is uncommon and not to such an extent but, three days before they got here the water went completely off-colour. The night they arrived it finally turned SE but not knowing the water had seriously moved in we spent a couple of fruitless hours in the early morning on the inside catching bait. 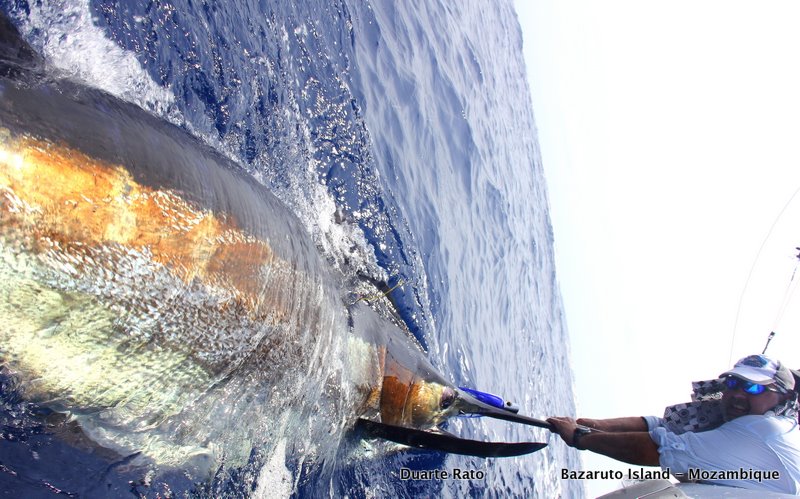 We had enough of it and set a spread of lures and planned to go deep for Blues but as soon as we got to 90 meters the water turned an electric Blue (which seriously put a smile on my face). Fifteen minutes later a dark shade materializes behind the long corner lure and after trailing it for a while finally inhales it properly and stuck. Ross made short work of it and in no time at all we had this very frisky Black to deal with by the boat. We released it and called it 150 LBS. The second day was alive at Lighthouse. We released a bunch of Yellowfin and bonnies and got a nice wahoo. Everything looked in place and early morning Big Bob hooked up and released a nice 600 pound Black just to the outside of us. An hour later we got a 350 come on the spread, knock the long corner and then come snake like billing the long left and fade away. Later we live baited and got sharked by a massive bull.

The third day started with a big YFT and a dorie. But it was nowhere as alive as the day before although we did get a lot of YFT on the blind. At 11am we decided to go deep for a couple hours and worked the 300-line counter for a while. I got a call from Steve on Wave Walker about a drifting commercial FAD they were working on a few miles down. When we got there it was gamefish mayhem and the boys had an hour of fun on bonnies, YFT and wahoo. We left to go shallow and work the afternoon incoming tide. On the way in 240 meters a very aggressive fish took the long left lure from the inside out and went off for the races. This Blue did all it was supposed to do, that is go absolutely insane after the bite, warping off at lighting speed, then turning and jumping towards the boat like Hell and then just decide to dash away into the horizon. This hysterical behavior soon settled down and we quickly got on top of the fish and released it at probably a dash over 550 LBS for Tim Bacon.

Very cool to catch a Blue as we, for good reasons, do not normally venture into their territory…