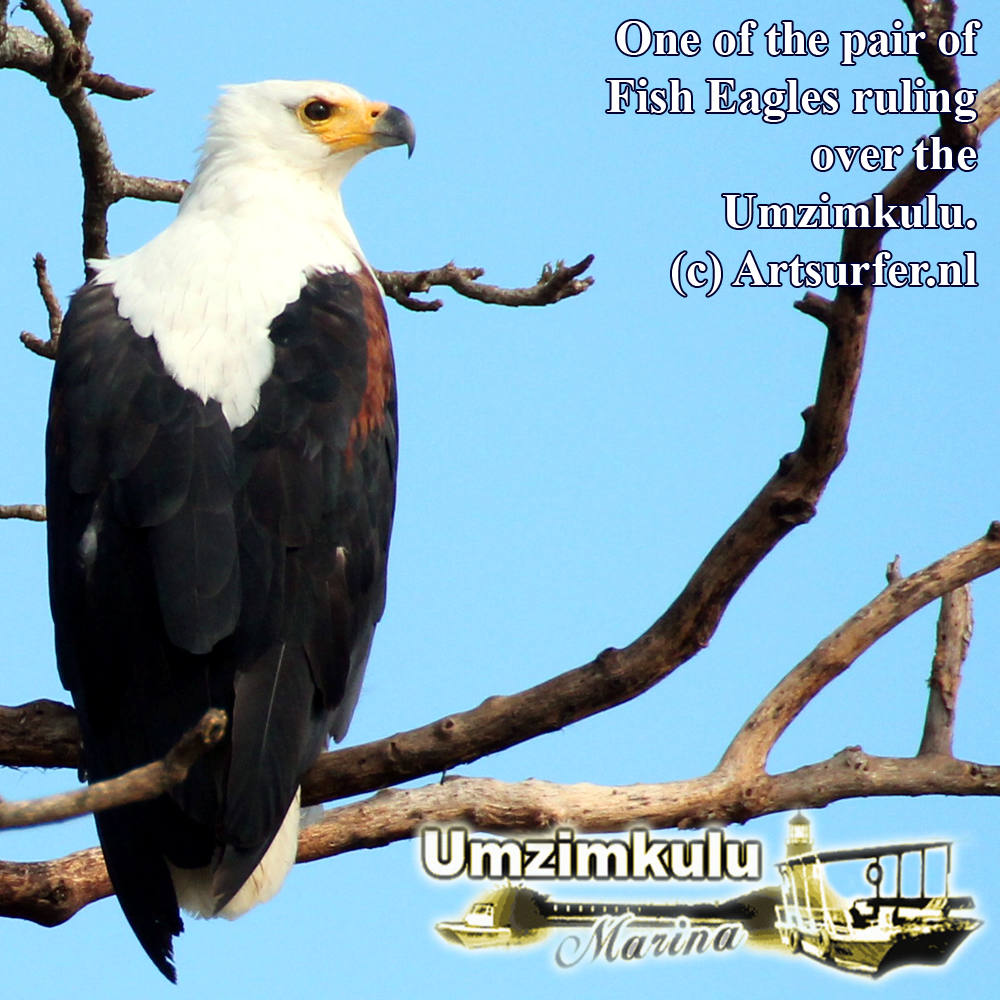 Our two resident fish eagles, a pair that have been living and breeding here on the lower Umzimkulu River, for decades it feels, were circling over head. The colours of the afternoon showing no sign of the impending cold front. The sun was out. The river had swelled magnificently since the mouth started closing.

And there were fish about. As I edged along the bouncy noisy floating jetty at the Umzimkulu Marina, a bunch of mullet were startled by something 50 m down towards the mouth. The blue-tailed guys were jumping for joy (according to science), and there were kingfish-like smashes going on, sporadically, all over. The perfectly calm water making it so much easier to see fish and movement.

Then one of my favourite things – a turtle! It popped his head up down where those mullet were having a panic from before. I cast one near him, kingfish and all sorts tag turtles when they hunting, but remembering a turtle ate my lure twice before in this river, I quickly cranked away.

Enjoying the scene, cast after cast, things looking good for putting in some real fishing time. And I really am looking for a garrick, to round off my winter estuary season.

And there came the fish eagle. Locked on target. Heading for the grunter bank in the middle, a hundred metres in front of me. Picking up speed and lowering trajectory he came in like a missile. Swooping in, the flaps came on and the the highly adapted landing gear came out.

The fish eagle literally came to a dead halt. Whaaaaat. We have twice seen the fish eagles here kill huge otters. And eat them all day right in front of us on Dead Man’s Island. So this was unbelievable!

As much as the eagles wings were flapping like crazy – the huge bird went right under for a second. But it came back up and the battle waged on. It looked like the fish eagle was still in the game at one point. The birds wings took for a moment, and I saw the huge back of whatever it was on the bottom end, being dragged up and out of the water. Huge, like 10kgs or so. But then a violent twist and huge splashing brought the eagle tumbling back down into the water.

The eagle came back up thrashing. And then it just let go!

The fish eagle then flew off into the sun, and found a rad spot on a huge tree. And let out a huge fish eagle cry. But it sounded like laughter. And when it’s partner joined in with a chorus – it also sounded very high spirited – like – “Hey man how big was that fish dude!” Whaaahaaahaaahaaa…

True fish eagles! Having a blast down on the river in the afternoon.

Early morning on the Umzimkulu River

Come and join us down at the Umzimkulu River…get in touch on umzimkulu@gmail.com or check out our river fishing packages at the following link: