Matakenya, sand flea, violin spider, scorpion or katana? Whodunnit?
The sand flea bite or sting is much worse than any mosquito. And they hit in squadrons. But their bite/sting is only their aerial attack. On the ground, in markets and other popular hangouts, their highly trained larvae wait for very dry conditions, and then maneuver in and climb right into your body…usually into the toe or heel. Once in, they setup camp, and start to reproduce!
Soon after the invasion, after a few days or so, you might just feel an itch. Or like me, a searing pain…it was in my right middle toe, this time, which woke me at midnight, on fire.
I got up, walked around and it kind of abated in intensity a bit…I took a painkiller and got back to sleep, only to wake with a painfully bright red and swollen toe.
At this stage I thought I may be have fallen victim to the dreaded violin spider, known worldwide as the recluse spider.
However, the telltale small white blister wasn’t there, but there was a real sensitive spot at the beginning of the toenail, and soon it was swollen to the max. It looked like ET.
After a few days, it just got worse, and coloration and textures ranged from polka dot red to purple and dirty white. I just kept it closed, changing dressings often and using an anti biotic cream that had merchurochrome in it – so a luminous pink was added to the pallet. By the sixth day the violent violin had been ruled out since I still had a toe – and speculations ranged from a broken toe(?!) to a scorpion to an infection.
So while it’s possible, but highly unlikely, that I broke my toe the night before and couldn’t remember – a scorpion sighting around here is commonplace. From the huge fat tailed black monster reaching six inches long, to the tiny pale brown ones that come scurrying out of simbiris poles when being off loaded – after their free ride from way inland, to the coast. But we don’t get the pale death scorpion that is so dangerously rife in the middle east, so tiny yet so lethal…and holds the records for death by scorpion worldwide. But we get a whole bunch of other venomous versions, including one called the transvallus!
My toe was aching all this time, but the real pain came when I kicked my toe coming out of the bathroom one morning. My heart literally stopped. My head felt as if it was being crushed. My toe shone out – radiating white stars and stripes. My stomach set like concrete. My fingers tingled. My good friends Chad and Charles laughed their heads off. The sound clanging through me like dub step. And this lasted a full minute. No avoiding it. Pure pain.
So when I was redoing the dressing one day, a local took a look, and gave me the trumped up honour of the scorpion attack. Nothing to do but ride it out, the sting of our worse scorpions taking about a week to go away.
But it was not. After another irritating few days and sleepless nights, I felt the familiar itch of a matakenya worm on my right foot middle toe. In the Tofo market that day, where there are always a bunch of matakenya specialists, the final and correct diagnosis came through. Two squads of matakanyas, one in each toe, and the fact that the left toe group chose to burrow under my nail…was the cause of all the fuss!
So, after being appointed a surgeon…13 year old Diago, (a veteran of matakenya surgery, normally the real young kids get the job), I was taken into theater for open air surgery.
Using a blue swimming crab’s claw…they are extremely sharp (one got me whilst pushing the boat in the Inhambane estuary…it bit right through the hard calloused skin no problem and just held on as I tried to kick it off whilst the locals screamed with laughter. When it finally went flying, as it hit the water, a local jumped on it, found another one right there, caught and chucked them both into the boat! Fearless!)…Diago opens the skin from the middle of the burrow, slowly, gently and expertly widening it until he can get inside, and under my nail. At this stage there isn’t much pain, it’s more irritating, but you get a bit of a victim complex as locals walk past, stopping, and laughing their heads off. Locals get matakenyas too…it’s a part of life in Mozambique, but they don’t let them get so far gone as mine currently had, due to so much misdiagnosis. It even fooled the clinic – they just gave me paracetamol and doxy. 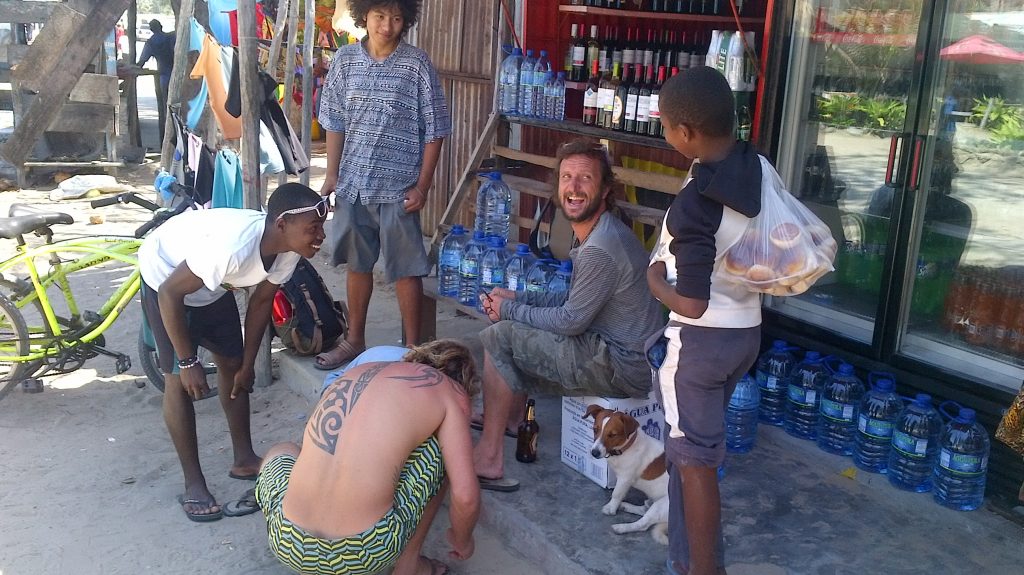 But then the front foxhole needed more coaxing and more weaponry. A flurry of Bitonga, instructions from shop owner Elvis, the chosen operating spot…mainly for the comforting view of Tofo beach…and a high speed kid returns with a pack of minora razor blades. Pouring savlon over any wounds whilst being operated on anywhere in Africa, is highly important, especially on blades and claws. Which we did.
Dr. Diago cuts across the width of my toenail, under my toenail. High levels of concentration, probing and extracting…and he gets them out – taking no prisoners. But my toe looks a mess…it has two gaping holes in it which are duly filled with savlon.
And satisfied Doctor Diago takes a squiz at my other toe but just gasps. He exclaims and marvels at the size of the invasion force and hideout.
It’s like the sound of your phone dropping into the ocean.
Diago calls for more space, and an empty beer crate to put my foot on – so that he can really get in there. Kids are dancing around with glee and excitement. Stinky our dog is very concerned (see photo). Charl is taking close ups. The operation gets underway.
He makes an incision across the width of the hideout again. It’s all happening underneath my toe this time. That soft skin normally curled up inside and underneath.
He starts the hole widening and with glee exclaims that he’s cornered three of the enemy in there, and a cache of eggs!
The first invader comes out easy enough and it’s added to the folded cigarette wrapping paper collection.
The struggle continues. He has to dig out and around and deep inside the hole to get the remaining worms and eggs. It’s a big hole and he has to work a full half hour to extract them all. Round and round it the crab claw goes…waves of pain sweep through, the odd sharper hit – just to keep me from going with it all.
More people pass by…kids still giggling and laughing, tourists gawking and gasping, especially when they ask where the worms come from. Right here I say!
Then it’s done. They are all out. We wrap up, pay the surgeon with 20mets, a coke and a smile and recommend he studies medicine after school. He kind of agrees and then not be outdone by any hospital, gathers up some refuse paper, makes a little fire right there, and incinerates the evil package of matakenyas.
Wear shoes and you should be fine. It’s the dry times to watch out for. When it doesn’t rain for weeks and gets really hot and dry. If you get one in Tofo, hit the market. Look for the 2M shop run by Elvis. He will arrange your treatment.