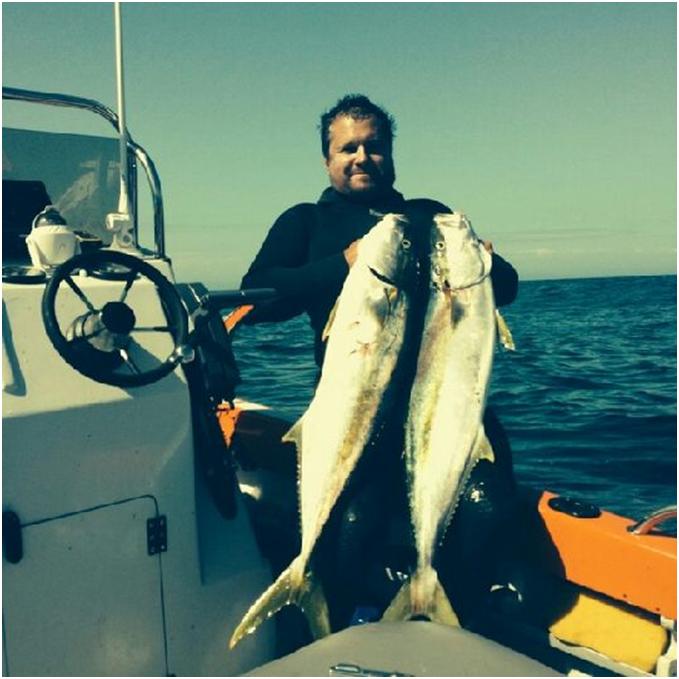 . Twin Tail by Marc Lange on the KZN South Coast. These are Tropical Yellowtail.

Tropical Yellowtail look just like Amberjack, but their lateral black GT stripe goes all the way through the eye. They are also more tropical and can often be encountered on the KZN coast in the summer months.

The much bigger yellowtail, and the huge amberjack also inhabit the KZN south coast reefs, and in winter months come right in close, sometimes hunting along the backline and in the surf zone.

The world record for yellowtail, held by Ray Bannister-Jones and caught way back when, off Hibberdene, weighing 56kg’s, was actually an Amberjack. The photo is in black and white, and confused the crowd for many years, until finally in 2009, it was corrected. Huge Amberjack – some over 50kg’s have been taken in the last few years, by Mike Lang, Neil Campbell and crew, also off Hibberdene, in deep deep water – 60 to 80 metres! Strangely, for many years, Amberjack weren’t caught in this region.

The world record for Amberjack is 70 kg’s, and some of over 100kg’s have been reported.

The yellowtail we catch in Southern Africa’s world record is 52kg’s, caught off New Zealand!