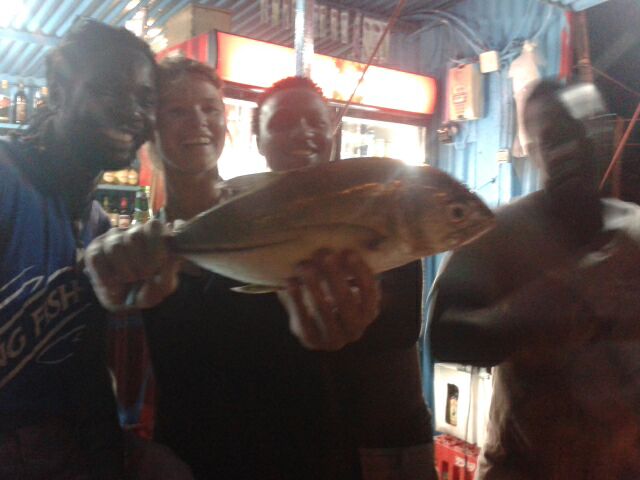 Fishing the Inhambane Estuary: Bludger Kingfish by The Frenzy

Fishing the Inhambane Estuary is completely cool. You just need that fishing licence from Maritimo, and a few cold beers for the afternoon into evening. Sunset. A light stick with a Mydo Luck Shot and jig fly combination, and another heavy stick with live bait trace completes the outfit.

Since it costs a small fortune in dollars to moor on the Inhambane Pier, there is very seldom any boats parked on the outside wall, and we have it all to ourselves. There is a fun contingent of local fishers who come down to the pier after work, to relax and chat, and of course, catch dinner. Some are in fact fishing for dinner.

Which comes happily in the form of these little Bludger Kingfish. They don’t get very much bigger than this unlucky one that fell to The Frenzies charms…

After two fruitless and exhausting episodes on the sea with the Kayak, The Frenzy was at the end of her tether. So off we went back to the city of Inhambane, to try for a bludger kingfish. We were privy to some inside information leading us here. It is absolutely wonderful fishing of the main pier out the front of Inhambane.
Parking at Pachiso Backpackers, right on the lagoon, we prepared over an ice cold 2M cerveja. Sabiki/Yozuri jigs with a Mydo Luck Shot on the end. The Luck Shot acts as an attractor and looks like a competitive fish chasing the little jigs.
Nothing happened for a while and then one of the local gangster giant kingfish showed itself in a spectacular display of anger as it smashed the living daylights out of the little sardines we were so eager to catch and put out live. The GTs here are black in colour and I have been splashed soaking wet right on the top of the jetty before! The problem is that it is nigh impossible to fight these big fish from the pier. There are just too many obstacles and we all know a GT. There are the razor sharp shell coated pylons making up the pier. Serious rocks 8m below. Endless water taxis coming and going, into the night. Anchors and moorings for the water taxis. Actually, it is impossible.
Then two humpback dolphin came swimming up the tide and also had a feast. All the while the bludgers were smashing away at the endless shoals of baitfish below us.
And then The Frenzy went away. Her rod buckling and line melting we were both convinced the Mydo had been taken and so she put the pressure back on the fish. A few minutes later and there it was, a beautiful shiny bludger kingfish. But it had taken a jig and the Mydo Luck Shot #2 was just plain gone!
How were we going to haul the hefty little bigger all the way up to the top of the pier? One chance and we took it. The fish lay still for a second and The Frenzy just hauled in one consistent motion.

And there it was! Fresh fish for dinner!

These giant blue tailed mullet are caught daily off the pier. They are gaffed with weighted trebles and hauled up. They use light handline with tiny hooks to hook these pretty fish. with.

Inhambane Pier – US$50 to park your boat against it!

The huge Inhambane Bay. Whitesands to starboard, Linga Linga to port. Panzy Island dead ahead. Sunscreen causes cancer! Get your shade on instead!