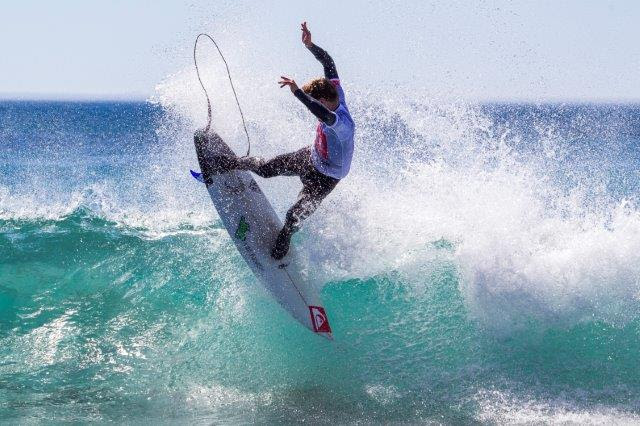 Kommetjie, Cape Town, South Africa – The opening event of the Quiksilver Takes One To Know One Series took place in small, clean and contestable surf conditions at the weekend. Two foot (0.5-metre) swell at Kommetjie’s Long Beach greeted over 90 surfers from all over the country at the Surfing South Africa 3A PST-rated event that catered for open men and under twenty pro junior boys.

Durban’s David Van Zyl put on a solid performance to win the open men’s division. Van Zyl managed to impress the judges with radical backhand surfing to post the highest score in the twenty-five minute final.

“I am very happy with my win, it’s my first win in the open men’s division and it feels great. The R8 000 first place cheque will come in handy and I can’t wait for the other two events in the series,” said the twenty year old from Durban North. Van Zyl narrowly clenched the title ahead of fellow Durbanite Daniel Redman in second, Diran Zakarian of Melkbosstrand in third place and Slade Prestwich (Durban) finished in fourth place as he received an interference call from the judges.

Local boy Max Armstrong had the home crowd in his corner and comfortably won the pro junior final. He stamped his authority on the final when he posted a massive eight-point ride by executing a series of critical backhand maneuvers throwing buckets of spray into the air. Armstrong left his fellow finalists needing big scores by the final siren and pocketed a cool R4 000 for his efforts. Melkbosstrand’s Diran Zakarian managed to make the finals of both divisions and placed second behind Armstrong. Jeffrey’s Bay local Dylan Lightfoot was relegated to third place after some precise surfing while local boy Jarred Veldhuis finished in fourth position. Veldhuis was also awarded the “Skullcandy Performance Award” for a fine display of aerial surfing throughout the two day event. Winners and finalists took home prizes from sponsors Drift HD Camera’s, Techniblock Sunscreen, Skullcandy headphones and Zigzag Magazine.

Quiksilver’s Dane Patterson was very pleased with the first event of the series, “We are very happy with the first event, the swell was a bit small but the weather, conditions, amount of entires and vibe on the beach was unbelievable. The level of surfing was top notch. It’s vital that South African surfing has these solid events for our surfers to compete against one another and gain valuable experience.”

The two remaining events in the Quiksilver Takes One To Know One Series will be held at Umdloti, KZN at the end of May and at Victoria Bay in September.

For more information, photos and videos on the event and series, go to the official event website: www.quiksilver.co.za/totko.