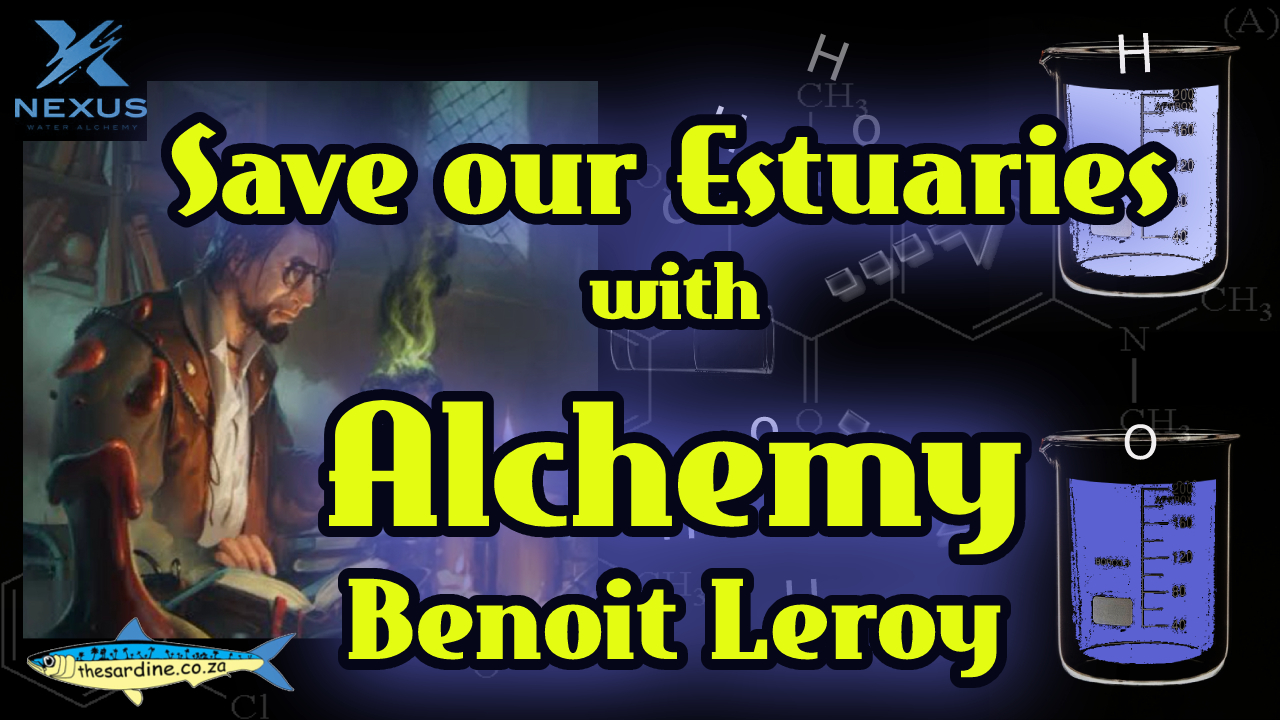 Alchemy can save our KZN estuaries – featuring video with Benoit Leroy

Here in KZN, along the eastern seaboard of South Africa, we have systematically destroyed 99% of our estuaries.
Agriculture did this. We did agriculture.
Swathes of indigenous thickets and bush were ruthlessly replaced by invasive plants. Sugar. Wattle. Bluegum (these days it’s macadamias).
This was done before in colonial expansionist times. Nobody seemed to have a clue as to what they were doing to this planet.
All so that instead of walking places and growing our own food at home – we take taxis, cars and buses, work as wage slaves, to go buy food miles away in a grocery store?! Destroying our very habitat with each purchase.

And making those in the current revenue streams and in power, richer. And you, poorer as your earthly inheritance is destroyed for profit centric individuals and entities. Who got their positions from politics or inheritance in the first place.

The removal of this indigenous buffer of bush has made for the inability of the earth in this region to absorb flood waters. Now it just runs straight down along the furrows and canals made by these profiteering farmers to remove the exact same water we need to stay there. Into the river that has been silted up by this exact practice. It bursts its banks. And people die.

This is what we have done.

Things have changed. We now do have all the clues we need to make better decisions. We do not have to walk in the footsteps of our uninformed ancestors.

We have got these days, technology. Which brings forth a myriad of options on how to tackle a problem. We do not need to go back in time and use archaic failed methods to remedy modern human-made problems.

We do not need our last free-flowing estuary to suffer the same fate as all the 99% of the other estuaries have faced. Total commensurate destruction. By restricting the tidal and flood pulse. With unnatural barriers. Concrete.

We do not need to live with invasive species that have destroyed the very land which we inherited in perfect shape a hundred years ago.

We do not need to continue our destructive ways with the earth, it’s rivers and the oceans.

Desalination. Will save the day here in Port Shepstone. Will bring water. Will bring hydrogen. Will bring prosperity to the area.

And will restore the estuaries.

But will not line the pockets of the surveyors, lobbyists, scientists, developers, politicians and others who rely on the archaic and completely unjust colonial system to maintain their big lifestyles on.

These profit-driven people want to build a concrete dam wall, or weir, right across the mighty Umzimkulu River. To abstract even more water from the already ailing river. Instead of a desalination plant.

For the same money!

Our money, to be precise.

And so here lies yet another aspect to the questionable problem of saltwater ingression.

Even carp and bass get caught below the pump station in the dry season.

In my opinion, not a grain of sea salt has been near the pump station EVER! Prove me wrong. Because I know it was raw sewage being sucked out of the river and showing urine as salt. I know because I live here. Sewage pumps into the river all day every day because local government has failed to manage the once-functioning system year after year now. Spending exorbitant amounts on temporary non-functional and wasteful, environmentally damaging berms. Totally illegally.

Zambezi sharks have only this free-flowing river in KZN in which to still breed. St. Lucia is open now but it was closed for so long that all those Zambezi lost their breeding ground. When the estuary was opened recently by conservation activists, hundreds of pup Zambezi sharks we seen everywhere in the following days. These big mommas must have been waiting and waiting and waiting. No fair.

Turtles, all 4 species we get here, use the Umzimkulu, to rid themselves of unwanted parasites. They come inside the estuary for weeks. Venturing right up to the freshwater, where the parasites can’t live. And they fall right off! Like a carwash for turtles.

The fabulously difficult fish to catch – our indigenous Ox-eye Tarpon, lives way upriver, in the fresh, But cruises right on down to the salt to breed and spawn.

I was here when the wolf cry went out. We tasted the water even! I know what saltwater tastes like. This was sewage water in our drinking water system. It smelt. Stank actually.

I would like to make an appeal for the salt level records of the pump station to be made available to the public. It is in the public interest to see how the decision to spend R200 million or more on damming a fully-functional estuary, comes about.

Any water problems we have here are actually due to the thousands of leaks all around the UGU District. Like the one under the low-level bridge across the river – over two years flat our blasting water back into where it came from. At our expense.

These are the problems that needs to be fixed. The system will operatee fine without the leaks. Wait until you read about St. Helen’s waterfall (coming soon).

How does anyone think that extracting more water from the already suffering system, will help the future? The river only has so much water and we have polluted and extracted it to a maximum threshold.

Fix the pipes! Use your endless budget to fix all that is broken. Use it to embrace and deploy the best and most relevant technologies to our problem here.

This is not the current government’s fault. But it is their duty to fix it. Or what are doing in office in the first place?

Advice to kids – don’t go into development, surveying or construction. Do research and conservation. Horticulture and aquaponics. Botany. Biology. Anything rather than end up like these guilty parties.

Use concrete for the right things. Not profit.

Words by Sean Lange. Video by Benoit Leroy produced by The Sardine News.

Come and check the river out yourself with Umzimkulu Adrenalin.