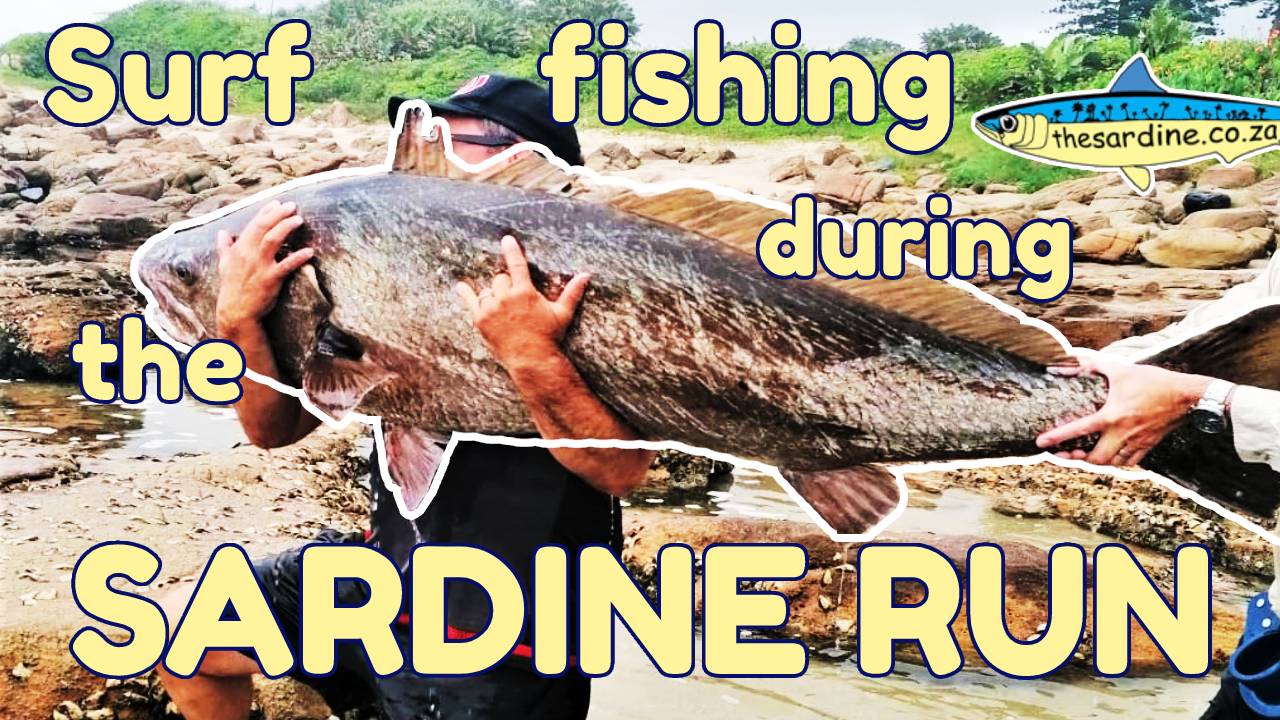 Surf fishing during the sardine run

This is a rundown through a list the game fish species we are lucky enough to encounter – during the annual sardine run. Here in KZN, South Africa.

It starts with the shad. These guys smash into those poor little sardines like piranhas. And a shad smaller than a sard will still eat a sardine. Those teeth!

Shad readily jump on a spoon or any artificial, when it’s like this.

The kob have actually already been here quite some time now. Many covert catches are made under the cover of darkness. And in the uncomfortable cold of the chilly winter offshore winds.

Check this mosnter tagged and released a little later in the season,last year! By Gerrard Powell and ably assisted by his mates who carefully put that huge fish back in the water. With a tag well-insertedby Mr. AntNel.

Our endemic and highly threatened Garrick population is also going to be here shortly. They are here to breed and in this vulnerable state, can be easily overfished.

Bag limit is two per man. For a reason.

This is an old video, that captures the surf fishing vibe down on the Sandspit on National Garrick Day…

But get a live mullet or shad swimming in the channel between the mid-break and the shore break, and you will get your Garrick.

Throw a big old ice cream plug over the same channel 200 or 300 times you also could be in the game. Also for…

The GTs are here! Already a few have shown their ugly faces around the social shark nets recently in amongst the sardine action. There are many species to choose from including the also release-worthy blacktip, greenspot and blue models.

Some people actually want to catch sharks! But mainly anglers hook them by mistake. Luckily they all are let go these days. The shark nets have done the shark population more than enough damage already.

It’s true, we hardly ever get sharks around the backline anymore. Luckily in sardine season, ALL the remaining ones come to visit. And we can see these beautiful and majestic animals swimming by in the wild.

Sharks in the Shorebreak…

We are ready to take you out there! Stationed down on the Umzimkulu River in Port Shepstone. With direct access to the ocean, Umzimkulu Adrenalin will put you right in amongst it all.

We have accommodation at the Umzimkulu Marina. Spillers House too. And we have an Egyptian Halaal restaurant downstairs. With a tented dining area right on the edge of the water. The MYDO Factory shop is in here too! 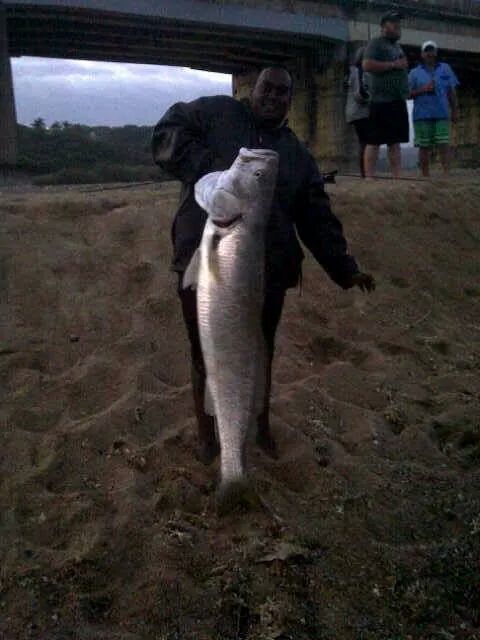 Daga Salmon at The Sandspit

Well it’s been a bumper season for daga salmon fishermen down at The Block and on The Sandspit, in Port Shepstone, this year. Many, many fish have come out in the corner where the Umzimkulu River has closed for so long. Hopefully they will find another river somewhere to spawn and breed or the summer will keep the mouth open long enough for them to enter.

Whilst researching the reproductive behaviour of this magnificent but threatened species, I came across an awesome and comprehensive description of the Daga Salmon, written by a very authoritative, Mike Otgaar.

Enjoy his work by following the link below. Thanks Mike!

Well it’s great to have Dean Sinclair and his mates testing the MYDO Luck Shot Mini out – I don’t even have to go fishing?!

Once again, here he is with not one, but TWO Daga Salmon, taken at a not so secret fishing spot, night before last.

Night time is the right time – at any of the south coast’s longer beaches – with that bountiful channel running along the shoreline. Casting just over the channel is too easy…the daga salmon / kob like to hang out in the white water that flows off the sandbank at lower tides.

Dean uses various paddletails and jerkbaits, and the same as Simon Fish in East London, has been getting all his fish on the lime green # 2 MYDO Luck Shot Mini, with a clear / white / silver plastic paddletail or jerk bait. 6″ to 7″ and even bigger paddletails are the go – the fish the team have been catching have all been in the 6 to 10kg range. But it’s chilled again here on the Kwazulu Natal South Coast, and the front that has dominated the weather the last few days, has left us with a sterling ocean with stars lined up all over the place. So we can expect a few bigger fish by the hardcore blokes who weather the freezing cold offshore as it belts down the river valleys, all the way down from the Drakensberg ice and snow!

Watch a video of the MYDO Luck Shot Mini in action on the surface and under water. Note how the action changes at different speeds, and how versatile you can be, with the weedless hook configuration and roll over action upon hitting an underwater obstacle. You can throw the Luck Shots for miles, in any wind conditions that we encounter.

The smaller # 1 sized lure, is just great to have with you all the time…to target estuarine gamefish, bonito swimming by, bass in a dam or shad in the surf. Replacing the jerkbait or paddletail is very simple, and some plastics have been coming out at more reasonable prices.

The MYDO range of dropshot lures are available at Lucky’s, Gremlins and The Tackle Box, on the south coast, or right here online…

Dean Sinclair braved the cold and was rewarded with this awesome catch of dagas. Throwing paddle tail with his mate, they were both soon vas, and got the fish out.

A bit later in the evening, veteran salmon angler Dean Winn caught one twice the size!

Daga Salmon are also known as kob, the further south you go. The biggest officially speared by none other than Jack Blignaut, stands at 57.4kgs.

In Australia they are known as Mulloway…

The biggest Daga caught by rod and line in South Africa is almost 80kgs! And that number gets challenged often, although many of the big ones are released by responsible anglers. These fish are in their prime and are best left to breed. But one or two of these smaller ones is fine to take out… 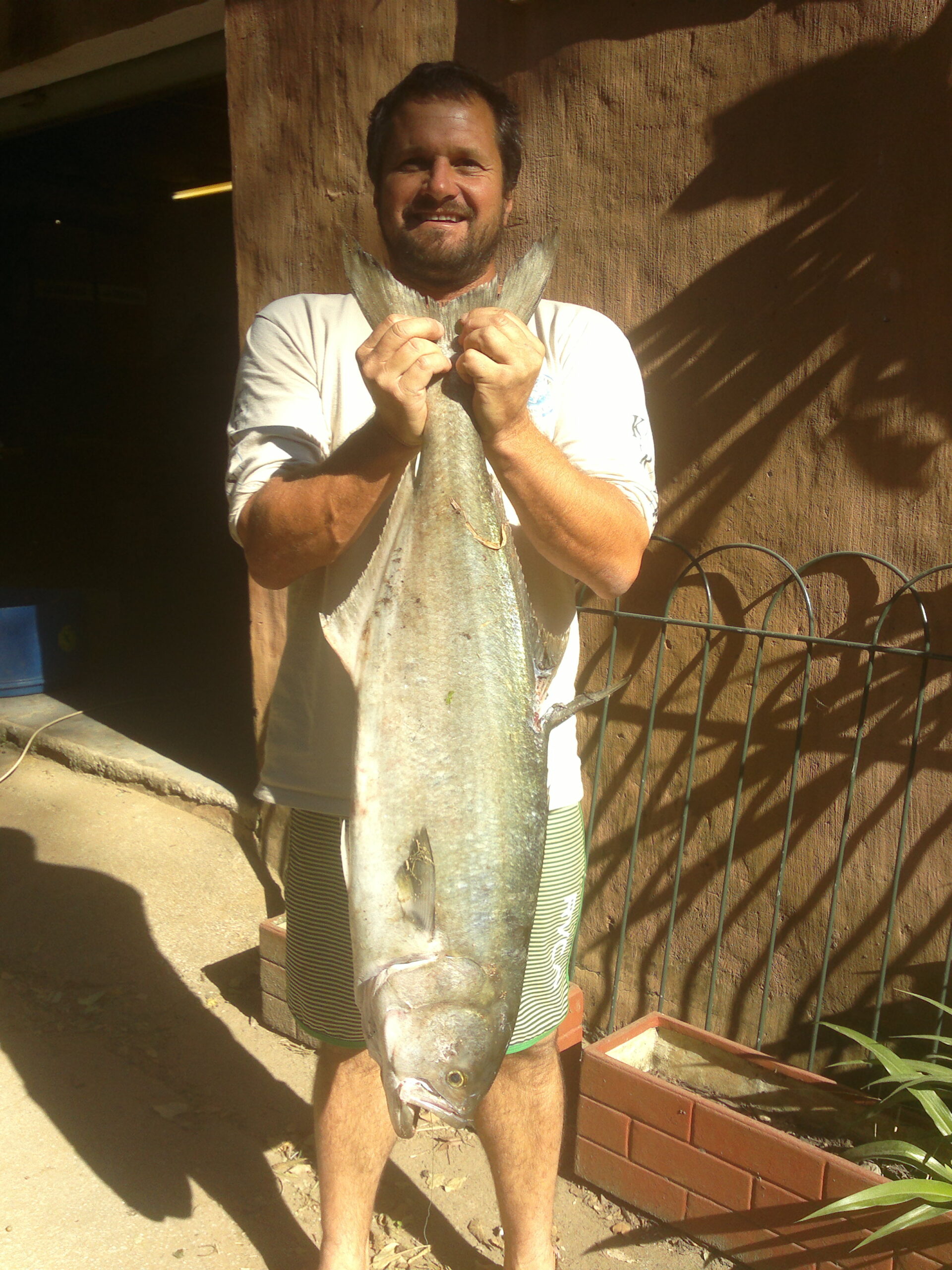 Marc Lange and Pierre de Villers (Cape Town) swam out together at Chakas Rock in Umtentweni this morning.  The excitement in Marc’s call about the shad he just shot didn’t really give us a clue as to it’s sheer size. Almost couldn’t look at it when he hauled it out of the car! 8.7kg’s! Thought it was a garrick!

It’s going to be an unofficial record though as Marc is not a member of the relevant association. Details of the current official record: H. Schifflers  | 7.9kg Elf | Mzikaba | 1980

Pierre shot two nice Baardman, and Marc also bagged a tasty little Queen Mackeral…they saw a shoal of kob / daga salmon…it’s not often the water is clean enough to dive the Chakas area…talk about making the most of it!

The shad had a karanteen trace hanging out of it’s mouth and was one in a whole shoal of giant shad like this one. Imagine the guy who was fishing for kara’s when this beast took his bait!

For more information on catching shad on the South Coast, buzz Sean on umzimkulu@gmail.com.

Or check out https://thesardine.co.za/mydo/ to read all about catching shad.