Shaun Posthumous and Mark Perreira turned up the drag on these two gas bottle sized yellowfin tuna last week. Weighing in at 30 and 31kg’s, these fish are representative of the good sized fish being taken on the south coast lately – a result of the tackling up trend going on. 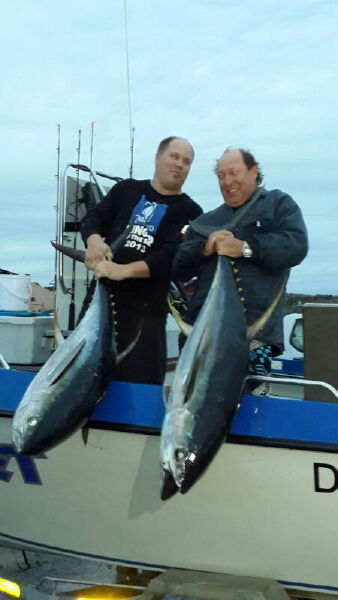 Since the shark epidemic on Protea Reef came about, anglers have all been losing good fish to the zambesi’s, the whalers, the hammers, the blackfin, the tigers…etc. The only way has been to tackle up, from the TLD’s to 30’s at least, with heavy line…80lb does fine!

Now imagine all this tackling up occurred long time ago…and imagine the fish that would have come out. Many TLD’s have been stripped and many huge fish taken by the sharks, using lighter 50lb and less tackle. Although the yellowfin move offshore when they reach sexual maturity at 35kg’s, there are still the huge amberjack, yellowtail and kingfish to deal with…their mean size being caught has also been going up with the sales of Stella reels and their counterparts. Full of 80lb braid!