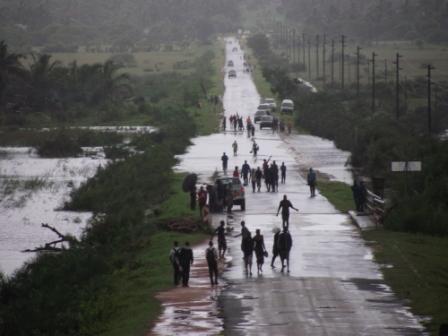 The driver of Fatima’s bus confirmed first hand that the main EN1 road is closed. Exactly where, we are not sure, and the useability of the bypass road is also an unknown.

What is known is all over the internet. 70 000 people displaced. Quite a few dead by now, the number growing. The road is flooded in a number of places, and at least one bridge is reported gone.

Fortunately evacuations were effected a few days ago. After the town of Chokwe was flooded by the Limpopo River flood surge yesterday, it was predicted to hit Xai Xai this morning.

Engineers were already on the site of the missing bridge earlier today, and it is hoped they will effect temporary measures in as quick as a few days.

The pic below is of a road closure in Lindela, a few days ago, in the Inhambane area. In Mozambique road closures are a common occurrence. Generally they only last a few days. Thanks to Keith Cooke for the photo.

In the meantime, it’s sunny skies and chevrolet here in Tofo. The ocean is flat, light onshore breeze – not a clue as to what is happening 200kms odd south!