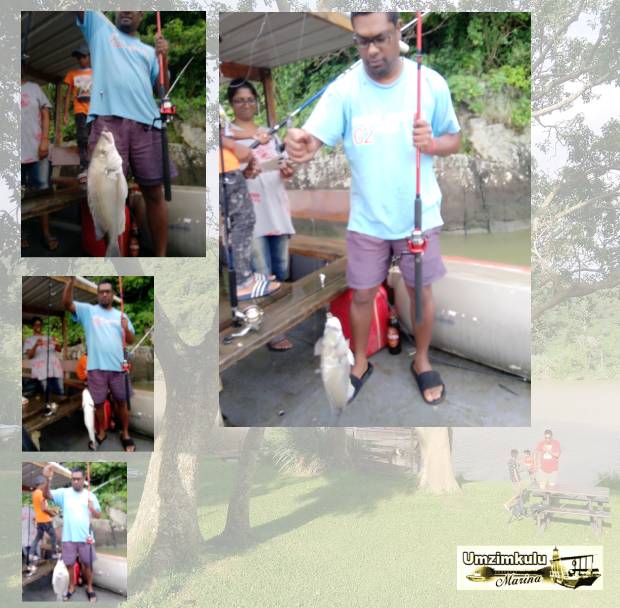 Fishing family takes down proper perch on the ‘Kulu

Acanthopagrus berda Forsskål, 1775 (Goldsilk seabream) goldsilk seabream, sly bream or picnic seabream seems to be the fish we are talking about here. (if you know any better please let us know we have been experiencing some signal loss when identifying certain fish lately) We just call them river perch, or perch.

So the very next session after our fishing family caught that awesome flagtail down at the estuary mouth area (see that video here), the next early morning, literally in the dark, we set out on the river. Navigating north this time, up to the big hole and deeper waters under the cliff.

Along the way, stopping at a recently collapsed tree full of weaver birds. Making nests frantically. After trying for a good twenty minutes we moved on. We need to spend a lot more time at this particular spot. Those big rock salmon will be stopping by there on patrol for sure. Waiting for a chick or two to fall in!

Moored up against the rocks at the base of the cliff, this is real nature. Fish eagles said good morning their own jovial way. All sorts of birds were out and about. Herons. Hawks. We even had a tern fly by?!

But the fishing was slow and aside from a few bites it was almost too quiet for my liking. But then our fishing dad had a huge Mangrove aka Santola crab at the surface. And true to form, as we contemplated how to grab him before he grabbed us, he let go. I was already tasting the curry!

Another slow hour went by and all of a sardine – Bang! Momma fish was bending. In fact, the fish was now peeling line. And with a real tight drag, the fish was literally pulling her down the boat towards the back. The boys all jumped in to help, relieving Momma of her bending rod. All having a go at trying to tame this mean fish. Eventually, the rod made it to Dad. This is a true fishing family!

After a solid and prolonged fight on the light tackle, the tired but angry perch came to the boat and the tiny hook was visibly only holding on by a thread. Luck was on our side and the fish hit the deck with a solid thump!

Perch are superb gamefish. Aggressive and wily at the same time. Those times when you just get a solid thump of a bite, and let’s go immediately – that’s most likely him knocking at your door.

Most times with perch though, you don’t even have to feed to strike. Just hit him back as he bites and hopefully your hook is sharp enough and finds home. Smaller hooks are easier, but if you are releasing most fish, as we all do these days, sometimes the smaller hooks go right inside. Causing complications. I like to use a 3/0 circle hook in the river so that I don’t get tangled with too many smaller fish. And I hook up far better like this too.

Circle hooks are definitely the way to go, whatever size you choose to fish. If you are releasing fish, your survival rate will go right up if you use circles. Many anglers on our trips have not made this revelation out yet, and often the hook sets way down in the fish’s stomach. No good.

Baits for perch are very much the same as you would use for kob or rock salmon. The ever-reliable sardine head with guts hanging out, on a bigger 5/0 circle hook, put’s you in the game for all the trophies you can find in the Umzimkulu River. Fresh prawn. Squid. The fish in the video above was caught on a beautifully prepared bait – a juicy mixed grill lovingly put together by Shaun the fishing Dad, for his wife. Who hooked the fish almost immediately!

Perch are actually aggressive enough to have produced many double and triple header strikes here in the river. They hang out in shoals and are pretty easy to locate and hunt. There are quite a few features in the river, that hold perch consistently. One place is a wall running down the middle of the river, that goes for about 200 meters, they can always be spotted here on the sounder. The other spot is close to Spiller’s, where the old bridge used to be. Some pieces of the old structure are still above the mud – perfect for ambushing perch.

Chuck in a live mullet at any of these spots, on a decent tide, and hold on tight! I like to fish without a sinker when I live bait – makes for thrilling one on one direct feel. But a small ball sinker in front of the swivel means a bit more control for you. Hook in the front somewhere. Ideally thread the circle hook Catalina style (just like for marlin) giving the live bait the most chance of finding a convincing a fish to eat.

Prawns are plentiful and right on the very top of all the predator fish favourite food list in this estuary. I have been lucky enough to fish a 6 inch long live tiger prawn, which became a trophy grunter in less than a few minutes, down at Spiller’s Wharf on the south bank too. There are quite a few species of prawn here in the Kulu. And don’t put your live mullet and live prawns in the same bucket – the prawns always win! I also like to fish the prawn without any sinker or float, but they can hide away in the mud/sand. So, A small sinker in front of the swivel, and a small float near the prawn keeps the prawn in the water column and not hiding out somewhere invisible. Place the circle hook right in the tip of the tail for best results when fishing a live prawn.

Then this nice fish, was caught right up at the top, in the deepest section that we can get to. It gets down to 12 metres after some good rains. But in this spot, up against the side, it’s about 4 metres deep – going deeper. This spot is also where I caught that little Zambezi Shark on a bass lure. For real! Luckily I have proof…

We are operating down on the Umzimkulu River right now, based back at the Umzimkulu Marina, and it’s on! The ocean has also settled and the colour line looks phenomenal these days as the current sweeps it along the coastline to the south.

We have been lucky with a good run of dorado so far. Check out some recent action on the Niteshift right here. And a double hit of dorado news from http://umzimkulu.co.za right here.

We are offering accommodation and fishing trips on the Umzimkulu River. And if conditions allow for safe launching, we can take a few lucky anglers out to sea. To chase dorado, striped marlin, sailfish and beeeeg ‘couta, as the hot season kicks in.

This is what you can expect…

If you want some of this KZN South Coast seasonal action, let’s goooooo!

Get in touch with Sean on umzimkulu@gmail.com or WhatsApp +27793269671, to chat about options, tides and dates.